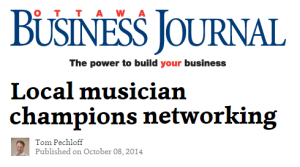 “A local musician is putting his creative touch to the concept of networking. Now, his events, dubbed eSAX (entrepreneur Social Advantage Experience) are starting to grow.” Ottawa Business Journal

A local musician is putting his creative touch to the concept of networking. Now, his events, dubbed eSAX (entrepreneur Social Advantage Experience) are starting to grow.

In fact, saxophonist Jarrod Goldsmith said Wednesday afternoon he expected about 300 entrepreneurs to attend his latest gathering at the Marriott that evening.

Mr. Goldsmith said the events are held every three months to coincide with the Ontario Self Employment Benefits Program (OSEB), a provincially funded program provided by the YMCA-YWCA.

Mr. Goldsmith went through the program three years ago. An archaeologist by training, he realized then that if he wanted to treat his passion – music – as a viable business, he needed to network.

Each event features one chamber. Ian Faris, president and CEO of the Ottawa Chamber of Commerce, is one of the speakers Wednesday.

The events typically run for three hours with an hour-and-a-half of networking to start, speeches and question-and-answer sessions for 45 minutes in the middle and more networking to wrap up the night.

“Some of the best networking happens at the beginning of the night and at the end of the night,” Mr. Goldsmith said. “The word ‘social’ is in the name of what eSAX stands for, so I try to break down the barriers and make the networking more fun, less formal and less intimidating for people.”

He said learning is a big part of the event, which is why the speakers are there, but really, it’s all about making connections.

“Having attended hundreds of networking events myself over the years, literally, I’ve seen what works. It’s not the same old,” he said. “I’m all over social media, man.”

He said there will also be live tweeting from the event (#esax).

Mr. Goldsmith said he paid for the event himself for the first two years but now has sponsors helping him out, and as the event grows, people are starting to take notice.

Peter Stewart, manager of Entrepreneurship Services with Invest Ottawa, said the event is just what the Ottawa business community needs.

and make connections to entrepreneurs all over the community,” Mr. Stewart said in a statement.

These connections are proving to be not only good for eSAX, but also for Mr. Goldsmith’s music project.

“I joined all of the chambers of commerce and then, bang, right away I started getting corporate gigs and in so doing, my name and my brand was growing and that is one of the reasons why eSAX is taking off so much,” he said.