Jarrod and Norman Bowley discuss the importance of purposeful communication for entrepreneurs while networking. Norman Bowley is a communications leadership expert who recently retired from a thirty-seven year career in Law. Norman is passionate about helping professionals to communicate well.

At 17, full of idealism and fresh out of Teachers’ College, Norm faced his first class: 35 C-Stream Grade 7 army brats, many of them less than a year younger than he, and all of them having been told repeatedly that they were failures. It was a tough year, but all survived. The kids learned a little, Norm learned a lot.

Ten years later, having learned quite a bit about education and communication, Norm went to law school.

He is a member of the Law Society of Upper Canada, the Society of Trusts and Estates Professionals, the Canadian Association of Professional Speakers and the Ottawa Hospital Foundation President’s Circle, has argued in tribunals from the Provincial Court to the Supreme Court of Canada and lectured in various professional venues. He brings wisdom, patience and common-sense to seemingly intractable problems, and is particularly finicky about careful legal drafting.

Approaching his third career, he is taking his communication skills “on the road” as a speaker and trainer.

eSAX was founded by entrepreneur and musician Jarrod Goldsmith. Jarrod is a Canadian small business community builder and is the embodiment of the small business spirit. He is one of Ottawa’s best known entrepreneurs and founded Sax Appeal (Canada’s Premier Saxophone Ensemble), Sax Appeal Productions (an agency for all live music in Ottawa and Gatineau providing live jazz music, classical music, Christmas and holiday music, cocktail music, or wedding music), eSAX (The Entrepreneur Social Advantage Experience); Ottawa’s largest entrepreneur networking community for small business, eXclusive eXperience and hosts both Ask the Fedora (a YouTube video series on entrepreneur networking for smallbiz) and the eSAX Podcast series.

This podcast was produced by Barking Monkey Studio. 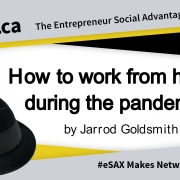 How to work from home during the COVID 19 Coronavirus pandemic